by Film Fan
on November 1, 2014
in Film Titles: J - L , Oh Crumbs - AVOID , The Bigger Boat
with Comments Off on Locke: Nutshell Review

You can’t miss the quotes on the front of this DVD. One read something like, “One of the most nail-biting thrillers of the year”. I am acutely aware of differences in perception – but I just cannot understand how this film received such high acclaim. I may have bitten my nails – but it was out of mind-numbing boredom. To imagine Locke – you need to remove the claustrophobia of Buried (one man ingeniously filmed inside a coffin), the heart of Gravity (one woman lost in space) and the minimalism of All Is Lost (one man stranded at sea). Also, replace an intriguing situation and a character you may come to care about. That is Locke: a dull character (meant to be an everyman?) in a boring situation – advertising a BMW for 90 minutes. Metaphors are heavily laden throughout – but it is not a film built on the concrete foundations it so hopes to be.  I recommend getting stuck on the M25 for two hours at night to have more thrills.

Under the Skin Review

by Film Fan on August 10, 2014 in Film Titles: T - V , Oh Crumbs - AVOID , The Truffle Shuffler with Comments Off on Under the Skin Review

This is without doubt the worst film I have ever watched! It is dull from the start, literally nothing happens, much of it is in silence and grey and drab (because it is set in Scotland!). Scarlett takes her clothes off which for many may be a selling point of the film but by the time that happens you really won’t care and just want to be put out of the misery of watching such a dull, dull film.  Yes there is a message there (Scarlett is an alien in a human body and she starts to feel and undertand human emotions which changes her) but I really didn’t care and just wanted it to end! 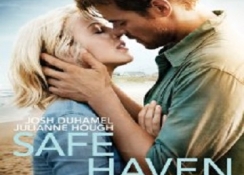 by Film Fan
on January 7, 2014
in Film Titles: S , Oh Crumbs - AVOID , The Bigger Boat
with Comments Off on Safe Haven

This is remarkable. Something I thought impossible happened… a film with more of a twist ending than the Usual Suspects is the first film to score ZERO nutshells! It may be that my fight to avoid throwing myself out of the window distracted me enough to not see it coming – because this is simply awful. Outrageously clichéd – in every imaginable way. It may be perversely tempting to endure this to experience the end – but, quite simply – you need to resist that temptation. Save yourself! There was some beautiful cinematography – but not enough to counterbalance the misery.