by Film Fan
on September 18, 2014
in Film Titles: T - V , The Truffle Shuffler
with Comments Off on Trespass: Nutshell Review

There is no way to describe this film other than shockingly awful! What Kidman was thinking by agreeing to star in this is beyond me.  The plot is a nonsense and gets worse as the film goes on and the acting is just as bad.  This is basically Panic Room but worse.  Nick Cage looks like he knows he is in a bad film and just wants it to end, which were my thoughts after about 10 minutes! There are no other words to add apart from don’t waste your viewing time on this.

Under the Skin Review

by Film Fan on August 10, 2014 in Film Titles: T - V , Oh Crumbs - AVOID , The Truffle Shuffler with Comments Off on Under the Skin Review

This is without doubt the worst film I have ever watched! It is dull from the start, literally nothing happens, much of it is in silence and grey and drab (because it is set in Scotland!). Scarlett takes her clothes off which for many may be a selling point of the film but by the time that happens you really won’t care and just want to be put out of the misery of watching such a dull, dull film.  Yes there is a message there (Scarlett is an alien in a human body and she starts to feel and undertand human emotions which changes her) but I really didn’t care and just wanted it to end!

by Film Fan
on August 2, 2014
in Film Titles: T - V , Nutshell Top Films! , The Truffle Shuffler
with Comments Off on The Wolf of Wall Street Review

The Wolf of Wall Street Review

This a great, roller coaster of a film.  Think Wall Street on speed.  Given this is based on a true story makes it even better.  Leo is great as the lead man but it is Jonah Hill who steals the film as his side kick and partner in their dodgy dealings.  This is not a film you would watch with your Mum as there is lot of naked ladies on show (so your Dad might like it!) but the whole film is a lesson of extremes that lead to almighty lows.  I found the running time slightly long, but that is one of the trade marks of Marty’s films, but there are only a couple of moments where the film drags, most of the time it kicks along at great speed and with great fun. Top film and one i want to watch again. 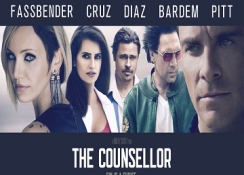 by Film Fan
on April 27, 2014
in Film Titles: T - V , The Bigger Boat
with Comments Off on The Counsellor Review

All the ingredients for a great film are here – a handful of top talent, a sprinkle of smooth cinematography and a pinch of good source material – all mixed by an ‘A list’ director. Unfortunately, it’s over-baked and dropped on the floor (from a considerable height!). There is a lot of talk but not a lot said – (think Tarantino but more awkward and pointless). However, it did initiate discussions as it is a more complex story – working out where all the characters and their motivations fit takes effort. Some say it will be considered a classic like Scott’s Blade Runner – only fully appreciated further down the line. Personally, I think I’ll stick to my Eton Mess analogy and never view catfish in the same way again either! by Film Fan
on April 21, 2014
in Film Titles: T - V , The Truffle Shuffler
with Comments Off on Thor – The Dark World Review

I was looking forward to seeing this film given the recent Avengers mash up and the Iron Man & Captain America’s being very decent supehero movies.  However this was a bit of a let down.  I wasn’t keen on the first Thor film in comparison to the other Marvel films but this one has lost some of the charm and humour of the original. Whilst it is still entertaining and the action is good it feels quite empty and doesnt seem to go anywhere.  As always Loki gets the best lines, if only there was more of him in the film.  Worth watching if you are a fan of this genre but don’t expect great things. by Film Fan
on April 11, 2014
in Film Titles: T - V , The Truffle Shuffler
with Comments Off on The Call Review

The main question (and issue) that arises from watching this film is why did they decide to give Halle Berry a bush on the head hairstyle?!! Once you get past this (and it is very difficult to do!) this film starts of well with a decent premise. Berry is a 911 operator trying to get a girl rescued who has been abducted.  However as the tension builds the storyline then gets daft and by the end its very, very daft.  Which is a shame as up unitil the last 20 minutes it was going well but the end does ruin the film. Worth a call to the DVD shop but mainly to examine the great hairstyle Berry is fashioning!! by Film Fan
on March 4, 2014
in Film Titles: T - V , The Bigger Boat , The Truffle Shuffler
with Comments Off on We’re the Millers Review

This feels like the sort of film you would see on a slob-out Sunday afternoon but never will because of the adult quotient of gags and language. There are laugh-out-loud moments, like with the Hang Over films and Bridesmaids. But, as with those films – the laughs are too few and far between. It is not as good as either of the aforementioned comedies and this one has an all too predictable Sunday matinee ending.

A pretty much by the number’s comedy which passes the time, has a few laughs but doesn’t really set any new levels in comedy terms. Will Poulter gives a funny turn as the simple teenager and Aniston turns it on a stripper with a heart but ultimately it is a easy watch and forgotten just as easily. by Film Fan
on February 8, 2014
in Film Titles: T - V , The Truffle Shuffler
with Comments Off on The Worlds End Review

I am a big fan of the previous Pegg/Frost combo’s (especially Hot Fuzz andPaul) so I had high hopes for this.  However I am a little disappointed.  Yes there are some funny moments (mainly towards the start of the film) but by the end of the film I found myself  a little bored.  Ultimatly there are to many “leads” which take away from the Frost & Pegg chemistry which is a shame.  Rosamund Pike is not a comic actress and struggles in this film, so much so that you could forget she was in it! Stick with Hot Fuzz as The Worlds End will leave you feeling a little cool. by Film Fan
on January 25, 2014
in Film Titles: T - V , The Truffle Shuffler
with Comments Off on The Wolverine Review

I am a fan of the X-Men films but this is the worst of the lot! Yes, even worse than X-Men 3 and Wolverine Origins! For a superhero film, which ultimatly it is, it is very dull, not many mutants (which makes the X-Men films fun) and Hugh Jackman looks bored for most parts of the film.  A feeling I am getting with this character! Hopefully Days of Future Past will be a return to X-Men form as this was very disappointing. by Film Fan
on January 3, 2014
in Film Titles: T - V , The Bigger Boat , The Truffle Shuffler
with Comments Off on Trance

If you are a fan of nakedness then there is one out standing scene in this film! Apart from that this is a film that tries to be way too clever and only achieves being very daft. It starts of ok with a decent premise but then it goes to pot and gets silly.

It has a promising start – but gets lost in its own convoluted ideas and presentation. I lost interest about half way through – where the focus switched from story-telling to directorial flair. Unfortunately, the ending is nowhere near as clever as it thinks it is either. Fair to say, the best bits definitely belong to Rosario Dawson. by Film Fan
on December 7, 2013
in Film Titles: T - V , The Truffle Shuffler
with Comments Off on This is the End

This is the End

Really only need to use two words to describe this film – absolutely awful. But in the spirit of a review I will use a few more. This is a bunch of actors (not all that you would class as particularly well known!) playing an exaggerated version of themselves during the end of the world. This is meant to be funny but it is just annoying and no one’s comes out of this film looking good. The movie feels very self-indulgent with the actors having a way better time than anyone watching it will have!