by Film Fan
on November 1, 2014
in Film Titles: J - L , Oh Crumbs - AVOID , The Bigger Boat
with Comments Off on Locke: Nutshell Review

You can’t miss the quotes on the front of this DVD. One read something like, “One of the most nail-biting thrillers of the year”. I am acutely aware of differences in perception – but I just cannot understand how this film received such high acclaim. I may have bitten my nails – but it was out of mind-numbing boredom. To imagine Locke – you need to remove the claustrophobia of Buried (one man ingeniously filmed inside a coffin), the heart of Gravity (one woman lost in space) and the minimalism of All Is Lost (one man stranded at sea). Also, replace an intriguing situation and a character you may come to care about. That is Locke: a dull character (meant to be an everyman?) in a boring situation – advertising a BMW for 90 minutes. Metaphors are heavily laden throughout – but it is not a film built on the concrete foundations it so hopes to be.  I recommend getting stuck on the M25 for two hours at night to have more thrills.

by Film Fan
on August 22, 2014
in Film Titles: J - L , The Truffle Shuffler
with Comments Off on Jack Ryan Shadow Recruit Review

I didn’t have massive high hopes for this film but hoped it would be a bit different to the norm.  It isn’t. It is not awful but there is nothing new here.  Chris Pine is much better as a young Kirk than he is as a young Ryan and Ken’s villian of the film is a throwback to he 80’s. It is very predictable and whilst I didn’t feel a huge surge to switch it off it is certainly forgetable once viewed. Baldwin, Ford & even Affleck were stronger on the role so watch one of those instead if you fancy a Jack Ryan flick.

by Film Fan
on August 14, 2014
in Film Titles: J - L , The Truffle Shuffler
with Comments Off on Lone Survivor Review

This is based on a true story and during the film you really sense the emotion that these guy’s must have been feeling.  It is a well acted film by all 4 leads and it pops along at pace but it is not an all out action film. Some of the shots, especially when they are falling over a cliff, are breath taking and you feel every bump and bruise. There are some flaws in the film, Eric Bana is wasted as the man in charge and you don’t really get to know the main charaters in terms of their personalities but the rest of the positives make up for that. Wait till the end credits as it really add’s to the emotion of the film and very much brings it to life.

by Film Fan
on May 10, 2014
in Film Titles: J - L , The Truffle Shuffler
with Comments Off on The Lone Ranger Review

This has Sunday afternoon film being watched at home whilst it rains outside written all over it.  It is a long film with not much happening.  There are some amusing scenes but these are few and far between.  Dep is under used as Tonto and the film is worse for it.  With a tighter run time this could be better but it drags in the middle and I found myself getting bored and wanting it to finish. It’s no Pirates (both Disney films) and I can’t see this being the start of a new franchise. 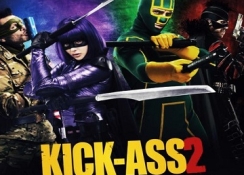 by Film Fan
on February 15, 2014
in Film Titles: J - L , The Bigger Boat , The Truffle Shuffler
with Comments Off on Kick Ass 2 Review

This felt like a watered down, slightly hammy version of the original. It doesn’t really develop the story and is not as well scripted or directed – so it doesn’t have the laughs or shocks. All told, if you liked the first – you may well be disappointed. If you haven’t seen the first – go and buy it for three quid instead of renting this.

Whilst this is not a good as the first, and great, Kick Ass movie it is still a pretty decent sequel.  It is more character driven (if you can say that about a comic book film!) which does add interest especially around Hit Girl.  The big baddie in the film (formally Red Mist) has all the best lines and is very funny as is Jim Carey. The only real disappoinment with the film is that it is much toned down from the first with less graphic fighting and no real shock value which the first one had by the bucket load. Overall a good sequel but could have been better if they went for an 18 certificate and a toned down 15.