by Film Fan
on August 30, 2014
in Film Titles: D - F , The Truffle Shuffler
with Comments Off on Escape Plan: Nutshell Review

It’s Sly and Arnie together in a film so you know just what you are going to get.  So, with that in mind the expectations have to be fairly low.  On the whole (with low expectations) the film is ok, old man banter between the 2 leads, a few fights, a fair bit of wooden acting and lots of hardened crim’s doing hard time. It’s amusing that Sly is meant to play an ex-lawyer turned prison escape expert, certainly a stretch of the imagination.  The main disappointment with this film (and it is in everything that he is in) is that Vinnie Jones has a large role.  Why anyone thinks he is a good actor (?!) to have in a film is beyond me, he makes Sly and Arnie (and virtually anyone on the planet) look like Oscar winning lead actors! by Thinkers in Business
on July 13, 2014
in Film Titles: D - F , Nutshell Top Films! , The Bigger Boat
with Comments Off on Edge Of Tomorrow Nutshell Review

I was totally surprised by how much I enjoyed this film. Source Code and Groundhog Day – both of which this film takes some inspiration from – became a touch tedious. It’s not the case with this smartly paced story. It’s clever enough to give you the ‘de ja vu’ feeling and revel in the frustrations of the lead character but it manages to progress the story and characters enough to keep you engrossed. It has a ‘playful’ feel about it – throwing in unexpected twists and thrills – whilst including great action and a surprising amount of laughs. All the parts of a great film are in here somewhere – but it’s just not directed or edited sharply enough to raise it above mediocrity. Essentially, there are three converging stories – all of which are ok in themselves – but the interweaving of these seems too rigid: a love scene to balance violence, family drama to balance more violence and a showdown that ultimately disappoints – despite the violence.

by Film Fan
on May 24, 2014
in Film Titles: D - F , The Truffle Shuffler
with Comments Off on Dom Hemmingway Review

This film is a masterclass by Jude Law in over-acting as the man man Dom. Whilst this is not the worst film I have ever seen it is certainly not great.  There are some funny lines in there but overal it is a lot of swearing, running around and shouting.  Jude Law is mis-cast as Dom and Richard E Grant is even worse as his sidekick. The second half of the film I spent trying to figure out what Dom’s on screen daughter has been in (that should tell you how gripped I was with Jude’s acting), turns out she is The Mother of Dragons!

by Film Fan
on May 10, 2014
in Film Titles: D - F , Nutshell Top Films! , The Truffle Shuffler
with Comments Off on End of Watch Review

I recently watched this film for a 2nd time and whilst I enjoyed it the first time it gets even better on 2nd viewing.  This is an intense ride of action, banter, emotions and strong characters and it is great.  It is not for those who are easily offended as there is a lot of strong language and it cracks along at great pace but not at the expense of building character arcs. Much of it is handy-cam and this add’s to the excitment of the movie.  There are a couple of flaw’s such as it is meant to be a docu-style film, filmed on their cameras but that goes out of the window after the first quarter of the film. But, if you ignore that – it is an excellent, exciting, action packed, swearing filled, buddy movie. Typically, I don’t like blood and gore films – and this ‘reimagining’ has it in truck loads – nor do I find them horrifying. However, this has good enough acting, realistic enough special FX and an evil enough underlying theme – that is all so much in your face – that it does have the potential to creep you out and make going downstairs in the dark a more daunting prospect! (I have since seen the original – and the fact it was the original may be the only reason it is so well regarded! The 2011 version is truly horrifying in comparison – but does not have the humour) 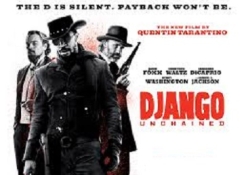 A ‘western’ like you have never seen before – with a brilliantly balanced dialogue – story – action – humour mix that Tarrantino does so well when on form. Better than Inglorious Basterds and truly entertaining to watch – even for non-western fans because it has so many elements to it.  It nearly has it all – it’s dark edge tinged with some genuine laugh out loud moments.  It’s just a little overlong – but is still wonderful (if very violent) fun!

So, we do not have a western themed team building event – but take inspiration from the structure and mechanics of this well told and engaging story. We also found the rather unconventional use of music particularly effective here – and adopt the same theory in all of our events. It’s why you will find a range of background music in all of team building days. It is induces the mood – quickening the heart beat or calming you down. If you liked this movie – you find influences in all of our corporate events – Target: Mars, Bunkered and Dead on Time. by Film Fan
on December 8, 2013
in Film Titles: D - F , The Bigger Boat , The Truffle Shuffler
with Comments Off on Flight

The first 20 minutes of this film are great; any film that opens with a naked hotshot walking towards the camera has got to have its good points!! And the actual plane crash is fantastic however it then slows down is we dive into Denzel’s spiral of self-destruction which, as ever, is well acted by Mr Washington but does feel very similar to other films that he has done. The end is very clichéd with a happy ending ( sort of) which does feel a bit lazy where they could have been a bit different or brave by ending in a different way. But a solid film and a decent, if a bit long watch.

Unfortunately – this proves to be an uncomfortable long-haul! The first 20-30 minutes are impressive and the flight in question is superbly filmed. Then it takes a nose dive until the final 10 minutes when it does eventually crash. Washington is slightly against type (not quite the pillar of strength he often plays) which is refreshing to see – and the performances are all good – but it is one of those movies you would stomach as part of your inflight entertainment but be disappointed with on your sofa!