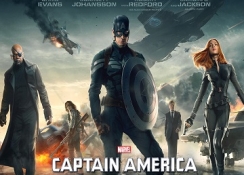 by Film Fan
on April 5, 2014
in Film Titles: A - C , The Truffle Shuffler
with Comments Off on Captain America – The Winter Soldier Review

This is a decent follow up to the equally decent first Captain America.  I enjoyed this film as it had aspects of a “thriller” plus the normal action sequences you would expect from a Marvel superhero film.  Black Widow had more screen time which can only be a good thing but they could have done with out the Falcoln as that looked pretty naff. This is not going to set any new standards for superhero films (say like the Nolan Batman’s did) but it is a fun packed 2 hours and if you like the Avengers (Iron Man, Thor and Co.) then you will like this.  The only issue I have with this film is that it is called The Winter Soldier, but the Winter Soldier is hardly features as the “big bad”!!