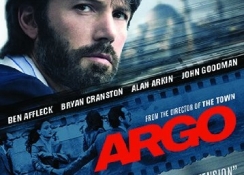 by Film Fan
on November 14, 2013
in Film Titles: A - C , Ideas For Team Building Activities , Nutshell Top Films! , The Bigger Boat , The Truffle Shuffler
with Comments Off on Argo

Even though you know how this film is going to end it is still really good, grips you to the end and is filled with tension. Ben Affleck (the new Batman!!!) is decent as the main man and it is a film worthy of all it’s awards.

Whether you know the outcome of this real-life story or not – the film is acted, directed and edited brilliantly enough to grab your attention and intensify until you are perched on the edge of your seat. I was actually ‘clenching’ at points and it was all due to the power of the story-telling – which doesn’t rely on trickery so commonly seen in movies of this kind. Very entertaining.

It is the power of the story telling and the engagement with the characters that impressed us. Imaginative, out-of-the-box problem solving is effectively demonstrated. If you liked the feel of this film you would particularly like our Bunkered team building day – as it requires the highest levels of strategic thinking of all – together with the ability to put your ideas into action when time is short. When it comes to the crunch – panic is not an option!